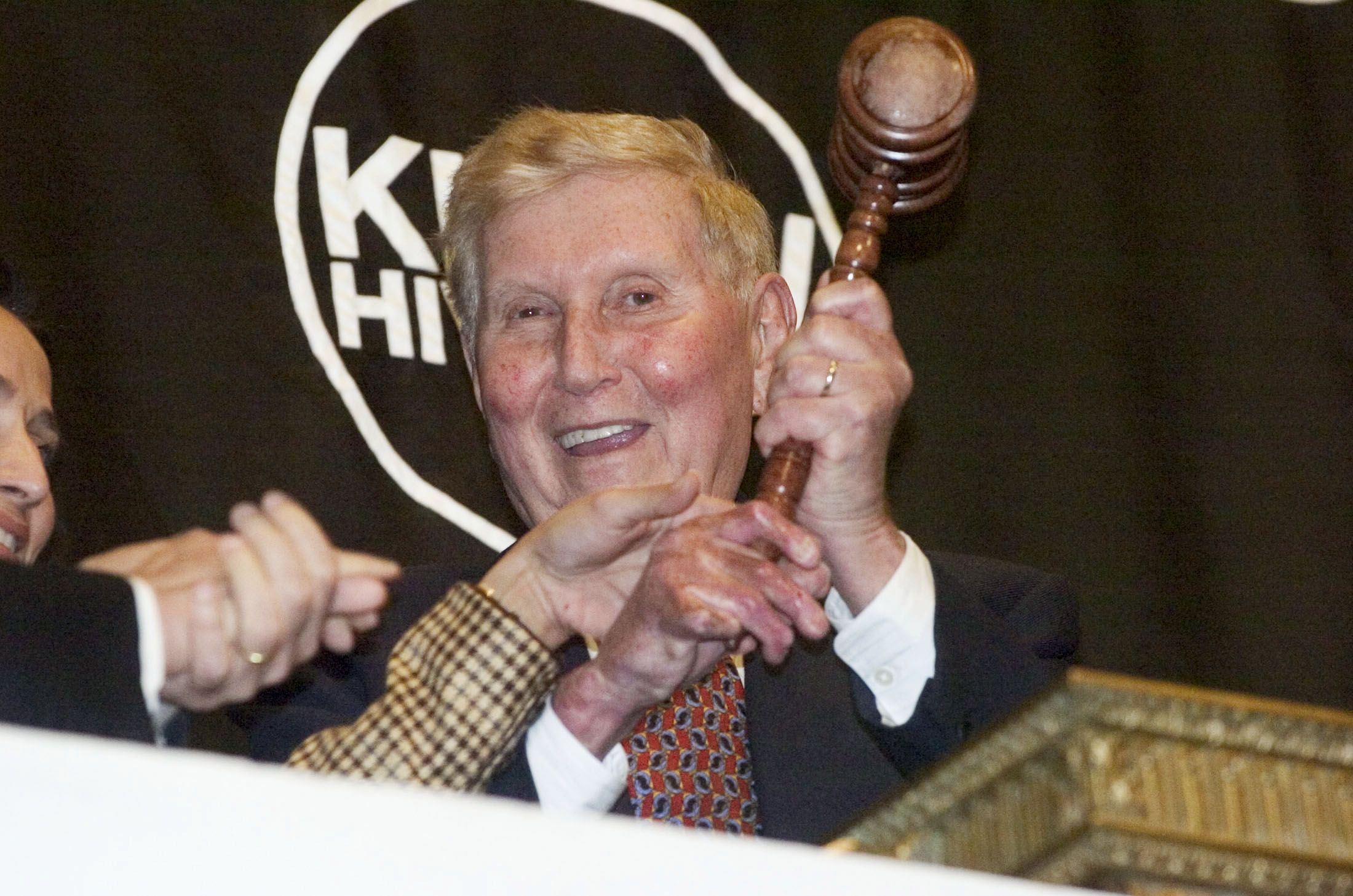 Sumner Redstone, the New England cinema operator who became a billionaire media mogul late in life after buying Viacom Inc., Paramount Pictures and CBS Corp., has died. He was 97.

Redstone died Tuesday afternoon at his home in Los Angeles. His holding company, National Amusements Inc., confirmed the death in a statement Wednesday. No cause was provided.

Even in a business known for larger-than-life personalities, the 6-foot-tall, redheaded Redstone stood out. His swashbuckling, billion-dollar takeover battles garnered headlines in the financial press. And his power struggles, love life and seemingly mercurial decisions, such as publicly firing action star Tom Cruise, made him the subject of endless industry gossip and tabloid stories.

He leaves an empire that includes media giant ViacomCBS and its library of pop-culture titles stretching from “Rugrats” to “Titanic.” Redstone had a net worth of $1.9 billion, according to the Bloomberg Billionaires Index. He controlled his assets through the closely held National Amusements.

In May 2015, Redstone said that upon his death his ownership in that company will pass to a family trust, whose trustees include his daughter Shari Redstone and her son, Tyler Korff.

Shari Redstone has been playing an increasingly active role for the past few years. She engineered the ouster of longtime Viacom CEO Philippe Dauman and gained the upper hand at CBS after CEO Les Moonves resigned following allegations of sexual misconduct. Her strategy led to the December 2019 merger of the two companies, a deal she pushed for to help them compete in the digital-media age.

“My father led an extraordinary life that not only shaped entertainment as we know it today, but created an incredible family legacy,” Redstone said in a statement Wednesday. “Through it all, we shared a great love for one another and he was a wonderful father, grandfather and great-grandfather. I am so proud to be his daughter and I will miss him always.”

Sumner Murray Rothstein was born in Boston on May 27, 1923, to Michael and Belle Ostrovsky Rothstein. His father changed the family name to Redstone in 1939, three years after he built the first drive-in movie theater in New York State.

After graduating first in his class at the Boston Latin School, Redstone earned a bachelor’s degree from Harvard University and joined a military-intelligence unit to crack Japanese codes during World War II. He received a law degree from Harvard in 1947, the year he married the former Phyllis Raphael, the daughter of a local department-store owner.

Redstone worked as a law clerk for the U.S. Court of Appeals in San Francisco before moving to Washington, where he argued tax cases at the appellate level for the U.S. attorney general. He then joined a private law firm as a partner.

“I thought I was going to practice law to make the world better,” Redstone said in a 1999 interview. “When I found out that the law — and we had a great law practice — was just another business, I decided to go into business for myself.”

He returned to Boston in 1954 to join his father and younger brother Edward in their drive-in theater venture. Eventually, he bought full control.

Redstone bucked the trend of leasing space in shopping malls, preferring to buy real estate. When drive-ins waned, he used the same properties in the 1960s and ’70s to build multiplexes.

As the theaters prospered, Redstone began to invest in movie companies. He bought and sold stakes in Twentieth Century Fox Film Corp., Columbia Pictures and MGM.

He had accumulated about 8.7% of Viacom, owner of MTV and Nickelodeon. In 1986, an investment group that included members of Viacom’s board proposed to take the company private at a price Redstone deemed “entirely too low,” as he wrote in his 2001 autobiography, “A Passion to Win.”

Redstone mounted a counteroffer and ultimately persuaded banks to lend two-thirds of the $3.2 billion purchase price, allowing him to win a bidding war against financier Carl Icahn and a Viacom management group. When the deal was done, National Amusements owned 83% of Viacom’s voting stock. At the age of 63, he became a full-fledged media mogul.

By late 1989, Redstone had pared enough debt to shed the bankers’ restrictions on new acquisitions.

As chairman, Redstone achieved much of his success through Viacom’s cable-television unit, which ultimately included the channels Comedy Central and Black Entertainment Television and produced “The Daily Show” and “SpongeBob SquarePants” among many other programs. He bought Blockbuster Entertainment Corp. in 1994 to help him finance a deal for Paramount Communications Inc.

In 1993, Redstone struck a deal with the chairman of Paramount, Martin S. Davis, to merge their companies. The move was consummated after a five-month battle with his one-time friend Barry Diller.

“Sumner kept coming,” Brian Roberts, the Comcast Corp. CEO who had supported Diller’s bid, told the Los Angeles Times after Redstone won. “Every time you could taste victory, he came back.”

Redstone sweetened his offer five times, and in the process, agreed to buy Blockbuster because the video-rental chain pledged an additional $1.25 billion to keep Viacom in the bidding. Viacom sold 18% of Blockbuster to the public in 1999 and the rest in 2004.

His $37.3 billion purchase of CBS in 1999, five years after buying Paramount for $10 billion, created what was for a time the second-largest media company in the world after Time Warner Inc.

“I saw the creation of an advertising juggernaut, No. 1 in the world,” he wrote of the Viacom and CBS merger. “I also saw that we would be the No. 1 creator and purveyor of television programming to the networks, cable and syndication — a syndication giant. I saw explosive growth.”

Redstone often said he would never retire and joked he would live forever. He followed a diet packed with antioxidants and exercised daily while enjoying a vodka in the evening. In 1979, he survived a Boston hotel fire by hanging on to a third-floor windowsill, suffering burns to 45% of his body. He also beat prostate cancer.

With his first wife, Redstone had a daughter, Shari, chairwoman of the merged entity ViacomCBS, and a son, Brent. The marriage ended in divorce. In 2003, Redstone wed Paula Fortunato, a 40-year-old schoolteacher. After about five years, they filed for divorce.

In 2005, Redstone announced that he was splitting his media empire into Viacom and CBS, naming Tom Freston and Moonves as the respective CEOs. Redstone later fired Freston, whom he had praised for overseeing growth in Viacom’s cable networks, and replaced him with Dauman, a lawyer and Viacom director.

Redstone’s later years were marred by a public dispute over his mental competency, triggered when a former girlfriend sued after being ejected from his house and replaced as his health-care proxy. Testimony in related court cases revealed that Redstone could barely move or speak.

His reign as a media executive officially ended in February 2016, at age 92, when he resigned as chairman at both CBS and Viacom. Still, even in his diminished state, Redstone, and his equally strong-willed daughter Shari showed they remained in charge.

The Redstone family will hold a private funeral, with a larger memorial to be determined once the coronavirus pandemic wanes. Redstone had requested that “My Way” be played at his service, and that he be buried in a family plot near Boston.