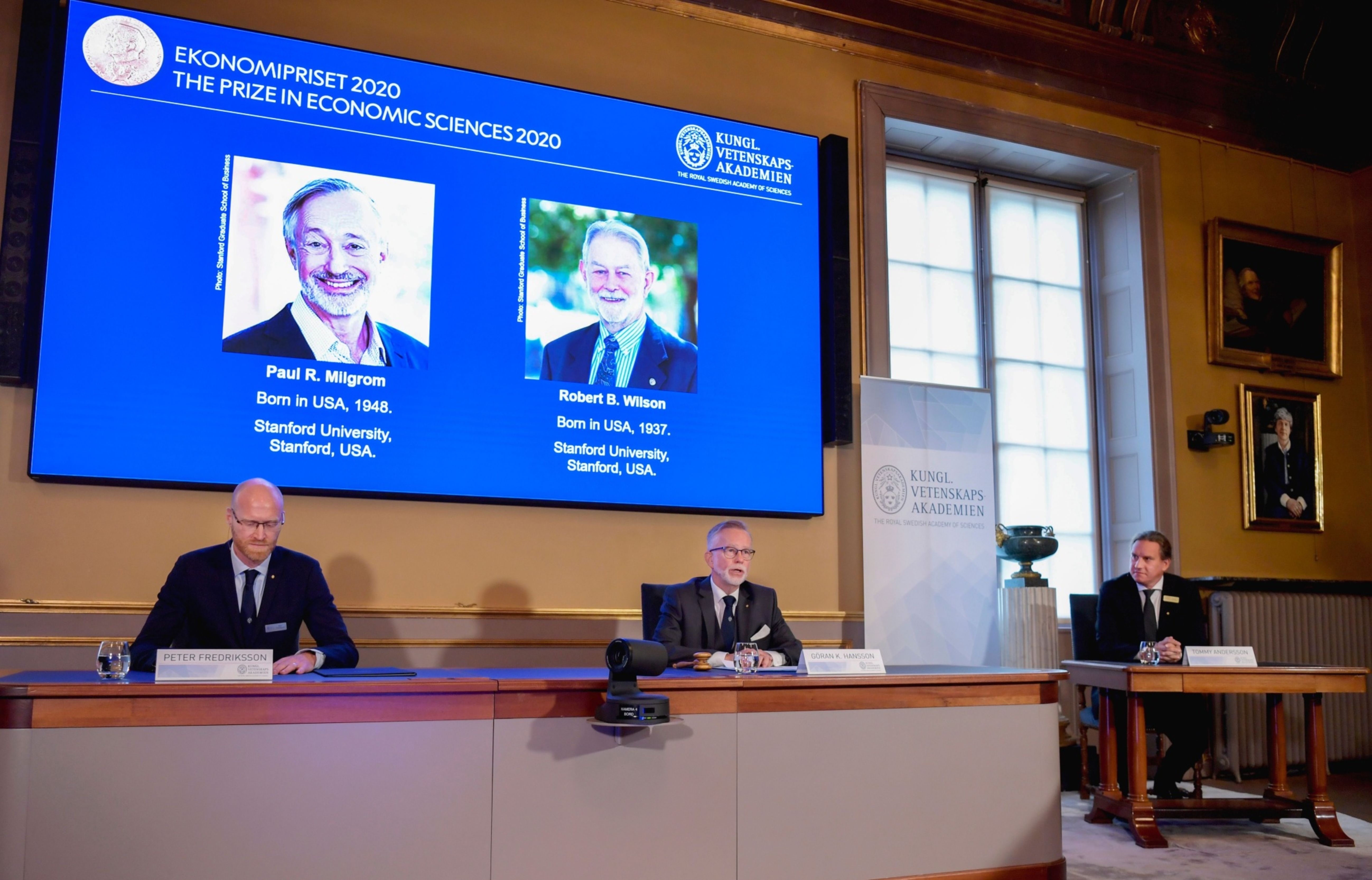 Paul Milgrom and Robert B. Wilson, who won’t be traveling to Stockholm to receive the award due to the Covid-19 crisis, have had their ideas applied to sales of everything from aircraft landing slots to fishing quotas. Their theories are even evolving to encompass renewable energy markets.

“They have used their insights to design new auction formats for goods and services that are difficult to sell in a traditional way, such as radio frequencies,” the Royal Swedish Academy of Sciences said in a statement.

The 2020 Sveriges Riksbank Prize in Economic Sciences in Memory of Alfred Nobel is again opting to laud the real-world application of the discipline, after recent years of honoring groundbreaking research ranging from inequality to climate change to behavioral economics.

“It’s very happy news, I’m very glad about it,” the 83-year-old Wilson told a press conference in Stockholm by phone from his home in California. “It’s very early in the morning here.”

Wilson, who was born in Nebraska and studied at Harvard University, was the thesis adviser of his fellow winner. The 72-year-old Paul Milgrom was born in Detroit and earned his Ph.D. in business at Stanford in 1978.

He and Wilson, along with Preston McAfee, are best known for the so-called simultaneous ascending auction, which was developed for the U.S. Federal Communications Commission’s 1994 sale of spectrum. The method has since been used to set prices on such things as electricity and gas.

Milgrom advised on Google Inc.’s 2004 initial public offering, and has also been an adviser to Yahoo! and Microsoft Corp., according to his website.

“They started with basic research,” Peter Eriksson, chairman of the Economic Sciences Prize Committee, said in an interview. “Then they used that research to design real-life auctions. So it’s the same people who did the basic research that have done the applications, which is somewhat unusual.”

The practical use of the winners’ ideas is something that continues to evolve. Wilson said that markets for renewable energy represent a new and challenging testing ground for their future application.

“We have all these needs now for energy from solar power, from wind, that’s quite variable,” he told Bloomberg Television. “So we need to create new kinds of markets for those kinds of variable resources to keep the supply provided to meet the demand. So that’s a new and different kind of application.

Wilson was questioned at the press conference on what was the last thing he bought at an auction. His answer showed just how ubiquitous the area of his work can be.

“My wife points out to me, we bought ski boots on Ebay,” he said. “I guess that’s an auction.”

The 2020 Economics Prize outcome expands the list of male laureates of the prize to 84. Only two women have ever won it, including Duflo last year.